Services are provided through the following: 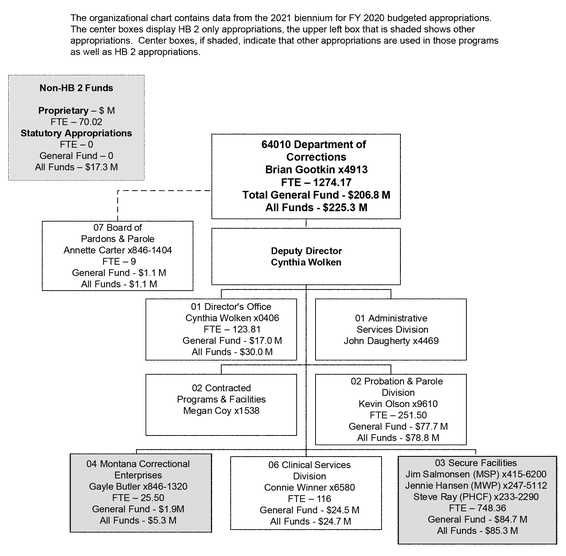 The Board of Crime Control was moved into the Department of Corrections (DOC) in the 2019 biennium.  These charts reflect both agency’s budgets combined since 2002.

With the exception of FY 2009 and FY 2013, population numbers have increased by between 2.0% and 6.0% roughly each fiscal year.  Historically, when offender populations have grown at a higher rate than was anticipated, supplemental appropriations were necessary. Corrections received supplemental funding in FY 2005, 2007, 2013, 2015, 2017, and 2019.

While funding for the department has increased in a manner very similar to that of the offender population, more notable increases are the following:

The department of corrections is supported primarily through the general fund (historically, around 92.0-95.0%). Increases in general fund support are primarily driven, once again, by increases in the number of offenders and the need to annualize contracted beds to house the growing offender population overseen by the department.

In FY 2015, state special revenue support for the agency increases due to legislative action that shifted funding for expenditures from the general fund to state special revenue funds, including supervision fees, restitution administrative fees, and parental cost of care payments for juveniles. In the 2021 biennium, a career ladder for probation and parole officers was formed and funded with state special revenue in the amount of $600,000 for the biennium.

The following legislative changes adopted by the 2017 Legislature include:

The following legislative changes adopted by the 2015 Legislature include:

HB 331, Requiring legislators to have access to adult and youth correctional facilities