The primary mission of the statewide public defender system is to provide effective counsel to indigent persons accused of crime and other persons in civil cases who are entitled by law to the assistance of counsel at public expense.

Services are provided by a combination of state employees and attorneys contracting with the state. In general, state employees provide services in populated geographic areas where the majority of the cases occur and contracted attorneys are used in less populated geographic areas. Contract attorneys may also be utilized in situations that create a conflict of interest for attorneys on staff. State employees include attorneys, criminal investigators, and legal secretaries. Services are broken among 11 regions along with an office for major cases and an appellate office. In addition, a conflict office manages cases where conflicts exist between represented parties in the same legal action. 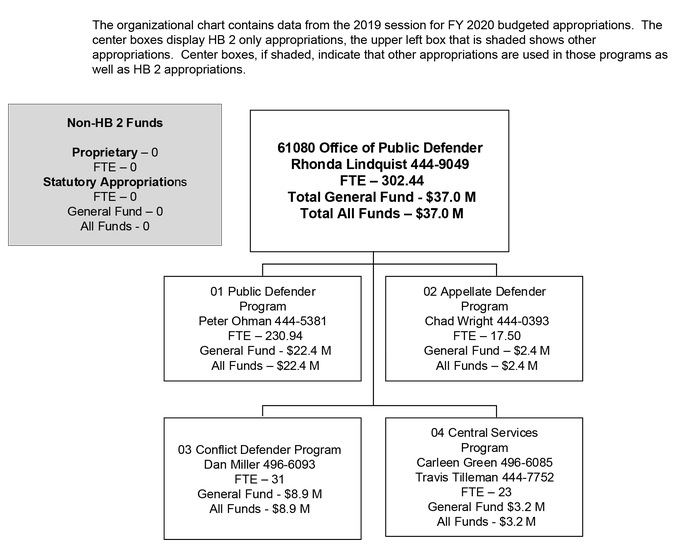 As shown in the above chart, the Office of the Public Defender’s general fund growth exceeds growth in the economy beginning in 2013. The agency has requested supplemental appropriations every year except FY 2008, FY 2012, and FY 2016. Supplemental appropriations were used to cover shortages in the following areas of the budget: costs of the new system exceeded the level anticipated, anticipated budget shortfalls, contract costs, and the cost of modified FTE attorney positions during the biennium.

The amount of state special revenue the agency receives accounts for a small percentage of the overall budget; even a small change in the amount of funding accounts for a large percentage fund change. In the past, the Office of Public Defender received state special revenue from defendant fees as a reimbursement for services. As of 2019 biennium, the Department of Revenue is collecting these fees and the Office of Public Defender is entirely funded by general fund.

Major legislative changes adopted by the 2017 Legislature include:

The following legislative changes adopted by the 2015 Legislature include:

The following legislative changes adopted by the 2011 Legislature include: