The office is comprised of one program, the Business and Government Services Program, which consists of five divisions. Services provided within the office include: 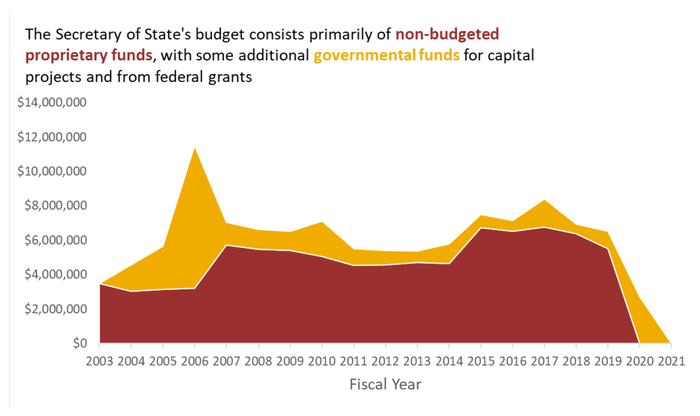 1. Over the last 20 years, the Secretary of State’s Office has received numerous federal grants through the Help America Vote Act of 2002 (HAVA). HAVA was passed by Congress in the wake of the controversial 2000 presidential election in Florida. The largest of those grants for the Secretary of State’s Office was awarded in 2006, when the legislature approved $11.0 million in federal dollars for the development a computerized statewide voter registration list that contains the name and registration information of every legally registered voter in the state. This sum included funding for technology development, advertising costs, education costs for local government voting administration personnel, and 1.00 modified FTE to coordinate the HAVA requirements;

2. Capital projects funds in FY 2010 and FY 2011 were appropriated for the initial implementation of the Secretary of State’s Systems Integration Management System (SIMS), to begin the full replacement of the outdated and ailing mainframe-based system, which had been in use since its installation in 1978. Capital projects funds were again appropriated in FY 2014, FY 2015, and FY 2017 for additional phases of the SIMS project; and

The Secretary of State is not funded through HB 2.